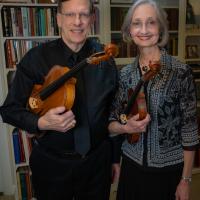 Pinner Publications is owned and operated by Jay-Martin Pinner and his wife, Dianne Pinner. Jay served as head of the BJU string department for 25 years. He and his wife, Dianne, co-founded the BJU Summer Music Camps in 1979. He has served as president of the South Carolina Chapter of the American String Teachers Association, and as editor for the SCMENC Festival String Orchestra List. His composition Downtown Suite for Strings was premiered by the Bob Jones Elementary School String Orchestra and won the National School Orchestra Association Composition Contest. The South Carolina Chapter of the American String Teachers Association commissioned him to write Fanfare & Allegro for Strings, which was premiered by the SC Junior All-State String Orchestra. His compositions and arrangements have been in the catalogs of several publishers, including David E. Smith, and Alfred. He is listed in “Who’s Who in American Music.”

Jay has appeared as concertmaster, soloist, and conductor with the BJU Symphony Orchestra, and for five seasons played principal viola with the Greenville Symphony Orchestra. He has conducted the BJU Symphony Orchestra in concert and on tour, and shared conducting responsibilities for the BJU High School Festival String Orchestra. He guest conducts for string sectional rehearsals with the Carolina Youth Symphony, and has conducted and given master classes for Furman University’s Summer Band/Orchestra Camp. He has served as a clinician and conductor for All-State, Honors and Regional Orchestras, and has adjudicated for orchestra festivals.

In 2011, Jay was awarded Studio Teacher of the Year, by the South Carolina Chapter of the American String Teachers Association. He has been privileged to observe master classes with David Becker, Bob Gillespie, Joel Krosnick, Dorothy DeLay, and David Kim.

Dianne Pinner retired from Bob Jones University after 40 years as a member of the Bob Jones University music faculty. She developed the Bob Jones Elementary School String Program as its Coordinator from 1982 until 2006, where it grew from 20 to 90 students. In 1980 she co-founded the university’s Summer Music Camps. From 1987 to 2006 she was actively involved in the pre-college events of the South Carolina Music Educators Association. Her students regularly held principal chair positions in the All-State and Region orchestras and won the All-State Concerto Competitions, soloing with the orchestra. In addition to her private teaching, she has taught classes in string literature, string pedagogy, music theory, and music education. She holds a Bachelor of Science degree in Music Education and a Master of Arts in Violin Performance from Bob Jones University. She continues to teach private lessons at Pinner Studios.

Mrs. Pinner has presented recital performances of classical and sacred solos and duos around the country with her husband, Jay-Martin Pinner. She co-founded the Carolina Chamber Ensemble, performed with the Bob Jones University Symphony Orchestra and the Bob Jones University Faculty String Quartet, and has substituted in the Greenville and Spartanburg symphonies. She presented the premiere performances of Encounters, a violin concerto, and Songs of the Kings, a string quartet, both composed by Dwight Gustafson.

Mrs. Pinner is a member of the American String Teachers Association, having served as president and secretary of the South Carolina chapter. She is co-owner and member of the executive board of Pinner Publications and of Pinner Studios, where over 40 students study the orchestral string instruments. She is active in the music ministry at Grace Baptist Fellowship.