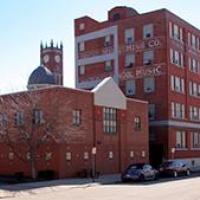 Founded in 1890, The Lorenz Corporation’s vibrancy belies its age. Founder E.S. Lorenz attained a reputation for being a driven, hardworking individual. At the age of twenty-three, he became president of Lebanon Valley College in Annville, Pennsylvania. When health issues ended his presidency in 1889, he turned to music composition as a part of his recuperation, compiling a hymnal for the United Brethren Publishing House in Dayton. Soon after, E.S. established the Lorenz Publishing Company, producing music for the small, untrained church choir.

In 1898, E.S. Lorenz established the company’s first subscription magazine. The Organist provided a variety of music in different styles and difficulties for church organists. The magazine became the foundation upon which E.S. built what is now The Lorenz Corporation. With a more focused mission, The Organist is still in publication today along with The Organ Portfolio (launched in 1937) and The Sacred Organ Journal (launched in 1962), bringing intermediate, moderately easy, and moderately advanced music directly to the doors of church musicians.
Early Publications and Staff
Other magazines soon followed. The first monthly choral journal, The Choir Leader, began in 1903. In 1913, feeling that churches needed a more moderate resource for choral music, E.S. launched The Volunteer Choir, which continues today. The creation of The SAB Choir rounded out the choral magazine offerings in 1972. Also continuing to meet the demands of today’s church musicians are The Church Pianist (established in 1984) and Keyboard Worship & Praise (established in 2007).

E.S. served as editor for all of the company’s early publications, and in 1901, his oldest son Karl K. Lorenz joined him as the company’s business manager. Karl’s leadership was vital in establishing and expanding The Lorenz Corporation’s influence on the music industry. In 1907, The Lorenz Corporation made its first acquisition with The Choir Herald, another choral magazine that was often seen as The Choir Leader’s strongest rival. Karl also oversaw the purchase of the Tuller-Meredith Company of New York, which specialized in Sunday school programs, diversifying the company’s offerings. Over the years, The Lorenz Corporation continued to invest in its competitors and other ventures, purchasing more than thirty other publishing companies.